Gastric (stomach) cancer is the third-leading cause of cancer death worldwide. New ways are needed to detect this cancer early when it can be successfully treated. This Research Team is working to identify biomarkers, such as particular bits of DNA or cells shed from the tumor, that circulate in the blood system and indicate the presence of gastric cancer. The Team has also developed a new detection technology using a pill-sized camera that can be swallowed by the patient and a marker that “lights up” cancer cells. This may enable researchers to capture images of stomach tissue at risk of developing cancer. If validated in a clinical trial, these methods will help doctors screen people in groups at risk of gastric cancer.

More than 11,000 Americans die from gastric cancer every year, and it is much more prevalent in other countries, particularly in Asia. African-Americans and Hispanics are also at increased risk for gastric cancer, and it is more common in men than in women. In the United States, the rate of survival for gastric cancer five years after diagnosis is only 32 percent. This is largely because the disease is not usually detected until it is far advanced. Better means of early detection would save many lives.

The SU2C Gastric Cancer Interception Research Team is developing new ways to spot the cancer early, when it can be more successfully treated. This includes identifying bits of DNA and cells that break off from the tumors and circulate in the blood. Biomarkers found in animal studies will then be validated in human blood and tissue samples collected in the United States and in South Korea, where gastric cancer is far more common. If these biomarkers can be definitely tied to gastric tumors, they can be used to help detect the disease at an early stage. Scientists on the team have also developed a new imaging agent and a tiny, pill-sized camera that could perform imaging of stomach tissue at risk of developing cancer.

The team will validate its new methods in a clinical trial. Once these methods are available at the clinical level, doctors could use them to screen people in populations at risk of developing gastric cancer—such as people with a hereditary predisposition—and catch the problem early. 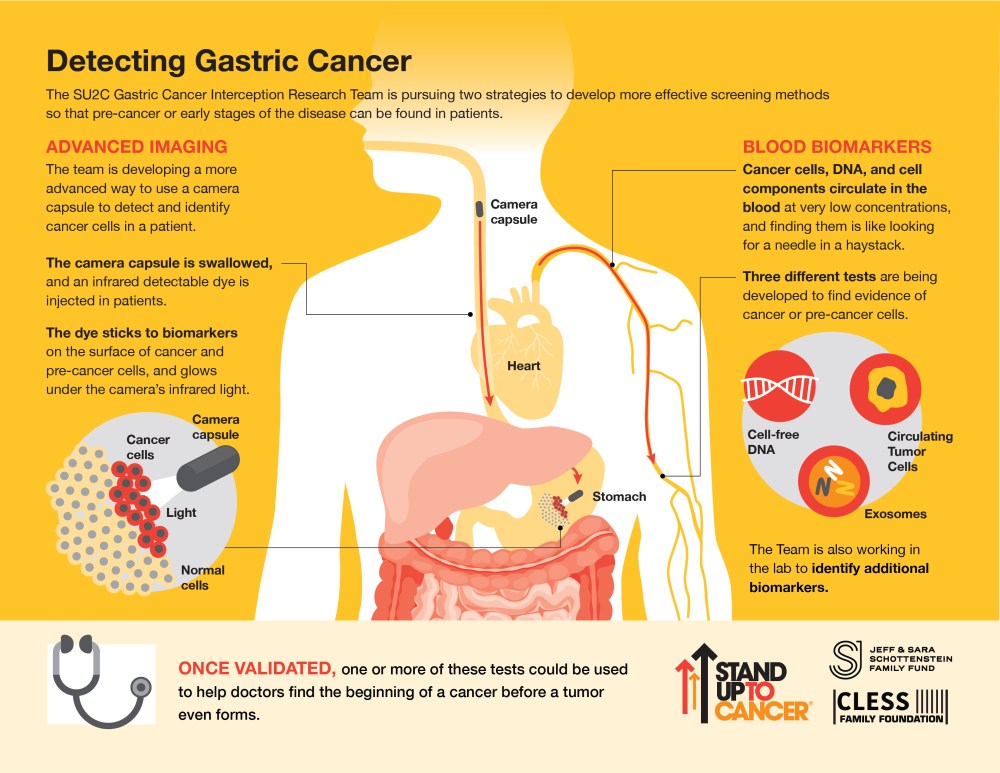