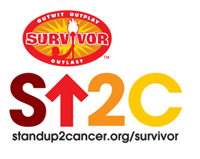 August 17, 2010 – As part of a new long-term alliance, Stand Up To Cancer (SU2C) is gearing up for its next Team Fundraising Challenge by joining forces with one of television’s most popular shows, Survivor on CBS. For the first time ever, Survivor will stand up and issue the “Challenge The Odds” Team Challenge with Stand Up To Cancer Ambassador and winner of Survivor: Africa, Ethan Zohn. Zohn, whose Hodgkin’s lymphoma is in remission, appeared on CBS News’s The Early Show this morning to announce the partnership and his new role as spokesperson for the Survivor team’s SU2C fundraising efforts. CBS will engage its viewers on-air and online through Survivor fan sites in the challenge. The SU2C fundraising widget is available to all SU2C Team Community participants to share on blogs and social media platforms (i.e., Facebook and Twitter) in order to rally support and encourage donations.

The SU2C Teams are a year-round fundraising program that offers a unique community where everyone is challenged to join an existing team or create a new one, which can honor a loved one or just raise funds for the fight. Periodically, Stand Up To Cancer runs online fundraising challenges, such as our current Challenge The Odds campaign, which will run from August 17-September 1. One hundred percent of contributions received from the public will go directly to research. The top fundraising teams will be highlighted during the nationally televised Stand Up To Cancer broadcast event on September 10 and the winning team captain may have the opportunity to Skype with a celebrity on-air.

“I am grateful to CBS for encouraging the world to outwit, outplay and outlast cancer,” said Laura Ziskin, co-founder of Stand Up To Cancer and executive producer of the 2010 show. “Ethan has been a champion from our early days, and he knows first hand the trials and tribulations of what 12 million U.S. cancer survivors go through. He is an inspiration to us all. I am a big believer in social media, and this challenge will help us engage fans and friends in the fight against cancer and get them excited for our show.”

“For me personally, this challenge represents the coming together of two worlds as a television survivor and a cancer survivor,” said Zohn. “As thrilling as winning the show Survivor was, I want to see everyone diagnosed with cancer become a survivor. That would be the ultimate reward. I hope fans of our show will stand up and participate in this great cause and this important challenge.”

Currently, one in two men and one and three women in this country will be diagnosed with cancer in their lifetimes. This online fundraising program encourages people to “Challenge The Odds” by forming teams to support innovative cancer research that is, in turn, being done by “Dream Teams” of scientists from different institutions, as well as young, individual researchers pursuing high-risk / potentially high-reward – in terms of saving lives – projects.

The 2008 Team Community Challenge brought in more than $80,000 in the run-up to the inaugural Stand Up To Cancer broadcast, which was a key component of the effort that raised over $100 million for innovative cancer research. “Crush Kids’ Cancer – David Archuleta’s Angels”, the 2008 winning team that has raised more than $50,000, will be participating again in the 2010 challenge, led by Archuleta fan Stacie Goldberg, who is herself a cancer survivor.

Archuleta encouraged all of his fans to watch the 2008 Stand Up To Cancer broadcast, and Marge Lees, one of the members of the fundraising team, did. After seeing Katie Couric speak about the importance of colorectal cancer screening with Charles Barkley during the broadcast, Lees – who was 51 year old at the time – had a colonoscopy and was diagnosed with colon cancer. Lees and her Team Captain Goldberg had become friendly, and Goldberg – a cancer researcher who is an oncologist – was able to help Lees navigate some of the healthcare decisions she faced. Lees had surgery and treatment, and is now going on two years of being cancer-free. She credits Archuleta and Couric with saving her life. Representing her winning fundraising team, Lees appeared with Ethan Zohn on CBS’s Early Show this morning.

About the Stand Up To Cancer Initiative

Stand Up To Cancer (SU2C)—a program of the Entertainment Industry Foundation (EIF), a 501(c)3 charitable organization—raises funds to hasten the pace of groundbreaking translational research that can get new therapies to patients quickly and save lives. In the fall of 2007, a group of women whose lives have all been affected by cancer in profound ways began working together to marshal the resources of the media and entertainment industries in the fight against this disease.

About the Entertainment Industry Foundation

Stand Up To Cancer is a program of the Entertainment Industry Foundation (EIF), the 501(c)(3) not-for-profit organization that serves as the collective philanthropy for the television and film businesses. EIF has distributed hundreds of millions of dollars to support programs addressing critical health, education and social issues.