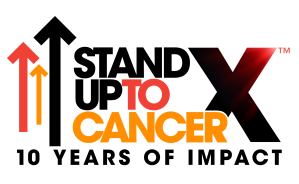 SANTA MONICA, Calif. – Jan. 28, 2019 – Stand Up To Cancer announced here today the creation of an $8 million Dream Team of top scientists focused on finding therapies for T-cell lymphoma, a rare cancer of the blood and immune system, using chimeric antigen receptors (CARs) to trigger the immune system to attack and destroy cancerous cells.

The SU2C Meg Vosburg T-Cell Lymphoma Dream Team: Tailoring CAR-based Immunotherapy Strategies to T-cell Lymphoma will be headed by Helen Heslop, MD, Baylor College of Medicine (BCM), with Gianpietro Dotti, MD, University of North Carolina Chapel Hill (UNC-CH), as co-leader. The team honors the memory of Meg Vosburg, a lifelong learner, educator, and humanitarian, who died from T-cell lymphoma in 2018 at the age of 51.

The announcement came at the annual SU2C Scientific Summit, a gathering of more than 400 scientists and SU2C supporters organized by the American Association for Cancer Research, SU2C’s Scientific Partner, and held at the Loews Santa Monica Beach Hotel.

The challenge in developing immunotherapy to treat T-cell lymphoma has been finding a therapy that attacks cancerous T cells without harming cells which are essential to the body’s immune response.

“We’re exploiting the potential of the immune system to cure T-cell lymphoma by genetically modifying immune system cells, called T cells, so they have new receptors that will allow them to recognize the lymphoma cells and kill them,” Heslop said. “And we’re evaluating several different targets and several different sorts of immune effector cells. It’s a modular sort of system where we can hopefully combine the best from each different approach to produce a therapy that will improve outcomes in this patient population.”

In addition, the team is working to modify the CAR-carrying cells so that they are not hindered by immune cells. This will help reduce the cancer and prepare patients for potential stem cell transplants to contain or cure the cancer.

CAR therapy is usually custom-built for each patient. The team is trying to find a way to develop CAR cells on an “off-the-shelf” basis so the therapy will be more available to patients and less expensive. The team is also working to identify biomarkers that will help track the effectiveness of the therapy, and is evaluating a novel small molecule which shows encouraging activity in T-cell lymphoma as a cytoreductive (size-reducing) regimen.

Heslop is Dan L Duncan chair and director of the Center for Cell and Gene Therapy at BCM, Houston Methodist Hospital, and Texas Children’s Hospital. She is a professor in the hematology-oncology section of the Departments of Medicine and Pediatrics at BCM in Houston and is also associate director for clinical research and leader of the Cancer Cell and Gene Therapy Program at Baylor’s Dan L Duncan Comprehensive Cancer Center.

Dotti is director of the immunotherapy program at the University of North Carolina (UNC) Lineberger Comprehensive Cancer Center and professor in the Department of Microbiology and Immunology at UNC-CH.

T-cell lymphomas make up less than 15 percent of non-Hodgkin lymphomas in the United States, according to the American Cancer Society, and they tend to be difficult to treat because they arise in the cells that are supposed to fight disease, not cause it.

“We are proud to extend SU2C’s work into T-cell lymphoma,” said Phillip A. Sharp, PhD, the Nobel Prize-winning molecular biologist from MIT who serves as chair of the SU2C Scientific Advisory Committee. “The Dream Team’s approach could bring a highly effective new treatment to what is now a relatively intractable disease.”

Other scientists on the team include:

Cancer immunotherapy – enabling the body’s immune system to detect and destroy cancer cells — has had a tremendous impact on a wide range of cancers, including B-cell lymphomas. However, it has not yet been effective in lymphomas that involve T cells. The biggest problem is finding a therapy that can attack T cells that are cancerous while leaving normal T cells alone, since T cells are essential to the body’s immune response.

The Dream Team will test therapeutic approaches that utilize cells to carry molecules known as CARs against different antigens that are found on the surface of cancerous T cells. Knowing the most effective combination of immune cell effectors and CARs will allow scientists to develop CAR-based therapeutics where the patient’s own immune system can expand into armies of cancer-fighting cells.

“It’s been just over a year since Meg’s diagnosis,” remarked her husband, Craig Vosburg, “and I’m excited to hear about the new ideas to help patients in the foreseeable future as a result of this Dream Team.”

“Meg had a passion for making people’s lives better, which she did through education and helping them find ways to pursue their dreams,” he said. “What better way to continue doing that than by extending lives and someday finding a cure for future patients diagnosed with this difficult disease.”

About Stand Up To Cancer
Stand Up To Cancer (SU2C) raises funds to accelerate the pace of research to get new therapies to patients quickly and save lives now. SU2C, a division of the Entertainment Industry Foundation (EIF), a 501(c)(3) charitable organization, was established in 2008 by film and media leaders who utilize the industry’s resources to engage the public in supporting a new, collaborative model of cancer research, and to increase awareness about cancer prevention as well as progress being made in the fight against the disease. As SU2C’s scientific partner, the American Association for Cancer Research (AACR) and a Scientific Advisory Committee led by Nobel Laureate Phillip A. Sharp, PhD, conduct rigorous, competitive review processes to identify the best research proposals to recommend for funding, oversee grants administration, and provide expert review of research progress.

About the American Association for Cancer Research
Founded in 1907, the American Association for Cancer Research (AACR) is the world’s first and largest professional organization dedicated to advancing cancer research and its mission to prevent and cure cancer. AACR membership includes more than 40,000 laboratory, translational, and clinical researchers; population scientists; other health care professionals; and patient advocates residing in 120 countries. The AACR marshals the full spectrum of expertise of the cancer community to accelerate progress in the prevention, biology, diagnosis, and treatment of cancer by annually convening more than 30 conferences and educational workshops, the largest of which is the AACR Annual Meeting with more than 22,500 attendees. In addition, the AACR publishes eight prestigious, peer-reviewed scientific journals and a magazine for cancer survivors, patients, and their caregivers. The AACR funds meritorious research directly as well as in cooperation with numerous cancer organizations. As the Scientific Partner of Stand Up To Cancer, the AACR provides expert peer review, grants administration, and scientific oversight of team science and individual investigator grants in cancer research that have the potential for near-term patient benefit. The AACR actively communicates with legislators and other policymakers about the value of cancer research and related biomedical science in saving lives from cancer. For more information about the AACR, visit AACR.org.