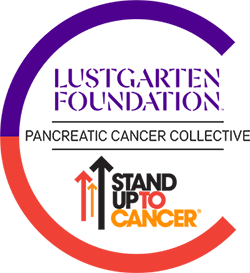 WOODBURY, N.Y., April 17, 2019 — Pancreatic cancer can be difficult to treat and often responds poorly to chemotherapy due to the presence of tumor cells located within the dense protective tissue, called the stroma. Research funded by the Pancreatic Cancer Collective, a partnership between Lustgarten Foundation and Stand Up To Cancer and guided by Dr. Tony Hunter at the Salk Institute was published today in Nature and has found that the interaction between pancreatic stellate cells (PSC’s) and pancreatic cancer cells could be “exploitable” due to the presence of a key protein and lead to the development of new targeted strategies for pancreatic cancer therapy.

In a normal pancreas LIF protein levels were undetectable but were dramatically elevated in the tissue of patients with Pancreatic Ductal Adenocarcinoma (PDAC). In both mouse and human pancreatic cancer tissue, the level of LIF was elevated in activated PCS cells and indicate that PSCs are responsible for the production of LIF.

“If we can block LIF pharmacologically or genetically, then we may be able slow down a tumor’s progression and metastasis making it easier to administer chemotherapy and prolong survival,” said Dr. Hunter.

Dr. Hunter and his team have found that the level of LIF in the blood determines how well a patient will respond to treatment. Patients with high LIF in the blood will have a poorer response to chemotherapy treatment and may have further disease progression than a patient who has a lower LIF level. His research has found that in mice deficient in LIF, pancreatic cancer cells in tumors were significantly smaller and the tumor was further reduced in size when treated with chemotherapy, suggesting LIF plays a role in chemotherapy resistance.

This research suggests that the presence of high levels of LIF correlates with disease progression and the tumor response to chemotherapy revealing that it could be useful as a biomarker to indicate a patient’s therapeutic response.

About the Pancreatic Cancer Collective

About Stand Up To Cancer
Stand Up To Cancer (SU2C) raises funds to accelerate the pace of research to get new therapies to patients quickly and save lives now. SU2C, a division of the Entertainment Industry Foundation (EIF), a 501(c)(3) charitable organization, was established in 2008 by film and media leaders who utilize the industry’s resources to engage the public in supporting a new, collaborative model of cancer research, and to increase awareness about cancer prevention as well as progress being made in the fight against the disease. As SU2C’s scientific partner, the American Association for Cancer Research (AACR) and a Scientific Advisory Committee led by Nobel Laureate Phillip A. Sharp, PhD, conduct rigorous, competitive review processes to identify the best research proposals to recommend for funding, oversee grants administration, and provide expert review of research progress.