Throughout July, American Airlines provided a once-in-a-lifetime opportunity to add a loved one’s name on to the official Stand Up To Cancer airplane in honor of cancer patients and survivors as well as those who have passed from the disease.

The powerful “Life’s Journeys” campaign launched July 1 with a cause marketing spot featuring Stand Up To Cancer Ambassador Tim McGraw alongside six American Airlines team members from across the U.S. Those who made a donation of $25 or more towards this campaign during the month could add the name of a person they stand up for to an American Airlines Airbus A321. 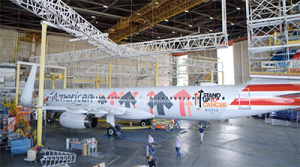 Over 22K names were added to the plane, which was unveiled at an event in Los Angeles on September 20. To mark the inaugural flight of the official Stand Up To Cancer plane, a group of cancer survivors and caregivers were whisked away to Orlando for a weekend getaway.

The campaign resulted in significant press coverage, including exclusive behind-the-scenes footage of the shoot with Tim McGraw on People.com, as well as coverage on iHeart Radio, Yahoo News, Yahoo Entertainment, CNN Money, The Drum, and CBS Dallas/Fort Worth. You can watch the broadcast spot by clicking here.